Disclaimer
This post contains images and text from a number of different sources.All images have been scanned by me  from old publications and cuttings.The copyright of these belong to the respective publications and their owners and is presented for recording my recollections of a day in my life.
Should anyone object to any of these images or any part of this post please contact me and if necessary I will remove the offending image or paragraph.

Scunthorpe Telegraph - The biggest story we ever covered 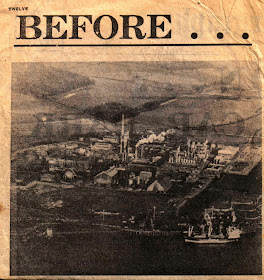 Back in 1974 I was employed as a Chemical Process Operator at the Nypro plant at Flixborough.
The name Nypro came from  the words Nylon Production.
There is an american company who also go by the name of Nypro and who's name comes from Nylon Products and bear no relation to this now defunct company.
On Saturday June the 1st at just after ten to five in the afternoon the place went up.
At the time it was the biggest peacetime explosion the country had seen. ( It was capped by the Buncefield Depot  explosion in 2005 )
Here are three more links to the Flixborough blast.
Explosion Liaison Group Meeting
Health and Safety Executive
Wikipedia

Now here's my recollection of the day.I've scanned my statement to the enquiry and it's published a little further on.
It was a Saturday we were down to minimum staff as quite a few folk had wangled the day off to go to the annual Appleby Frodingham Gala in nearby Scunthorpe.

I'd been up to the Sulphate plant to take my readings and headed back to the control room.
What happened next is condensed into my official statement.
Other recollections will follow this.

I am an operator on the Sulphate Plant and
have been employed by Nypro for over three years.

The Sulphate Plant is to the west of the factory as
a whole but must be distinguished from the Oleum Plant
although both Plants share the same control room.

On the day of the accident I was working the
3.00 p.m to 11.00 p.m shift. We work the shifts on
a rota basis but the personnel of each shift remain
together. I was with my usual colleagues and during
the course of the afternoon I carried out my routine
duties. Certainly I noticed nothing unusual.

At approximately 3.30 p.m I took samples from the Plant
to the laboratory for analysis in the usual way.

At about 4 o'clock I went round the Plant taking readings
and thereafter I returned to the Oleum control room.
As a matter of routine we take readings every two hours
and thus my next task was again to walk round my part
of the Plant at about 6,00 p.m in order to monitor the
instruments.

The Oleum control room is on the ground floor,
the switch gear for the area being above the control room,
I remained there from about 4.15 until about 4.50 when
I heard a noise very like a large balloon bursting.
The building did not vibrate but almost everyone in the
control room rushed out of the northern door.  I remember
grasping my safety helmet and rubber gauntlets as I went
through the door.  I think four of us rushed out and left
the Process Control Technician in the control room.

We all left in a hurry and thus we were aware that
something had gone wrong.
Harry Nattrass, who was the Process Control
Technician for the shift, later told me that he had
tried to look out of the southern door of the control
room.

Having left the northern door we re-traced our
steps along the outside of the control room in a
southerly direction.  When we came round the southern
corner of the building we looked east above the Sulphate
Store.  The store consists of a reinforced concrete
wall some 10 to 12t high and above the wall the roof
structure was being reconstructed.  Basically the
roof is a wooden structure and as work was being done
on the building it was possible for us to see through
the top half of the southern part of the building which
had been partially demolished.  We saw what I would
describe as a "heat haze" from the direction of Areas 1
and II.  Initially there was no flame but within literally
a second or two flames shot into the air above section 25.

We could just see the tops of the high vessels but not
the rest of the section,  I would put the height of the flames
at approximately 70 or 80 ft.  There was a lot of blue in
the flames and I think there was smoke at the same time.
It also appeared as though the flames were shooting out
behind the heat haze but this is not altogether clear in
my mind.

We had only been looking at the flames for a moment
or two when there was a huge blast which knocked me 15 or
20 yards in a westerly direction. Frankly I was not
conscious of any movement but at one moment I was standing
watching the flame and the next I was simply lying on
the other side of the road which runs in a north south
direction to the west of the Oleum control room. I
can remember no noise between the original sound which
I heard and the huge blast but I would assess the time
which had elapsed at approximately 30 seconds.  There
is no doubt in my mind, however, that I saw flames
before the second bang occurred although the second
explosion followed almost immediately upon the sighting
of the flames.

After I had recovered a little from being flung
across the road I regained my feet and ran between the
Pyrites Store and the new Acid Plant in a westerly
direction towards the bank of the river Trent.  I seem
to remember seeing Bill Lodge running from the Plant
and three or four of the boiler men.  From the river
bank I was taken to hospital and I can remember little
more about the events of that day.

The only other experience I have of difficulties
in the factory was when there was a fire on the Hydrogen
Plant.  Apart from this incident I know of no other
particular difficulties suffered by the Plant in the
last three years.

I landed about fifty feet from where we'd been looking. I must have been unconscious for less than a minute I guess. Acid tanks were either side of me, but miraculously they hadn't ruptured. I've always maintained that what saved our lives and that of the villagers of Amcotts across the River Trent was the reinforced concrete wall of a new warehouse still under construction deflecting the blast upwards. Mind you, it was the roof trusses landing on my back and legs that caused my injuries. I had deep bruising and displaced adipose tissue which I can still feel today.

Most of us on Area 3 once we'd recovered headed for the wharf, the line of immediate safety.
If the ensuing fire reached the large ammonia tank then even Scunthorpe would be in danger of being wiped off the map.
The majority of us were running for our lives. I did hear later that Jan from Mousehole, Cornwall went back to see if he could help anyone. There were other heroes that day, but Jan from Area 3 is the only one I recollect.

I later learned that our PCT (Process Control Technician) Harry had run towards the opposite door when the blast happened and he ended up underneath it covered in rubble.
Later when the fire and rescue teams reached our control room, they could here a voice but couldn't find him until they realised they'd been walking over the door he was under.
Harry was hospitalised for a while, but recovered well enough to live to a good age.

Now while we ran for safety it was later reported that a certain senior worker and of almost retirement age (I don't remember his name, but he was a bit of a character), overtook everyone to get to the road first with a broken ankle !
By the time we'd reached the road, the Fire and Rescue services were just about on the scene, but were being delayed by people who'd driven down to see what was happening.

Me and my best friend Colin were eventually taken up to the hospital.
Now what happened next has perplexed me ever since that day.
Because the blast had been so huge many buildings suffered damage in the neighbouring villages and even as far away as Scunthorpe. This caused dozens of minor (and maybe one or two major) injuries and suddenly the hospital was inundated.
After being dropped off just inside the hospital entrance a senior police officer on seeing me and Colin in our white overalls and walking OK, got hold of us and promptly put us on traffic control at the hospital gates. Of course, me and Colin knew no better so we ended up directing traffic for the next couple of hours.
It wasn't until months later that I thought about it and years later when I'd wished I'd found that senior officer and sued him for dereliction of duty and unnecessary suffering.
Here's a couple of guys, both injured and in obvious deep shock being made to prolong their distress because he couldn't do his job. If he is still alive and ever reads this I'd at least like an apology.
With respect to the families of those seriously injured and dead, me and Colin weren't the only ones to suffer.
Those couple of hours on point duty also had our families wondering if we were still alive.
My wife, looking after our four young daughters (the twins weren't yet 5 months old) was sick with not knowing, and when I eventually turned up the scene was one of unbelievable relief.
We didn't get any medical attention that day. Colin had damaged eardrums, and I've already mentioned my injuries.
I spent the following week with visits to the doctors and the hospital for x-rays and every day walking from my house to Bridges Road from where I could watch the plumes of black smoke still burning.
As well as the physical damage, for the next few years my nerves suffered.
I'd get scared by the sound of lorries passing too close, and any loud noise would have me jumping out of my skin.
Years later I realised I'd cheated death and my outlook changed. Nothing bothers me any-more.

Much has been written about what went wrong at Flixborough and it became a blueprint for countless Health and Safety directives as well as being used by the worlds fire services for training manuals.

In the immediate aftermath of the explosion the press, especially local, were having a field day with interviews, stories and pictures. I was interviewed for the Yorkshire Post though I never saw a copy.
My wife though kept a few cuttings and  after all these years in a brown envelope are almost turning to dust.Here are the ones I've managed to scan.

The first eight are from the Scunthorpe Evening Telegraph. 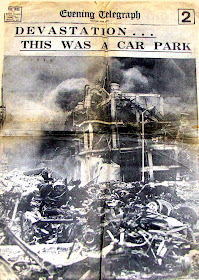 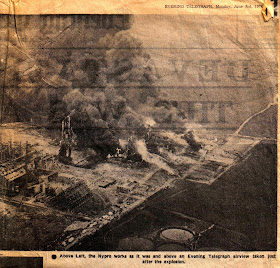 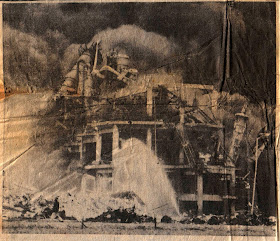 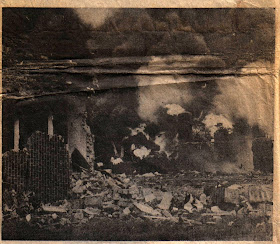 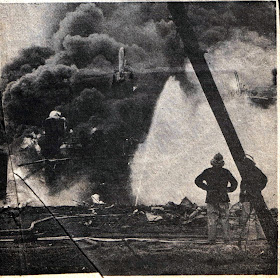 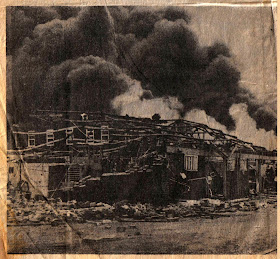 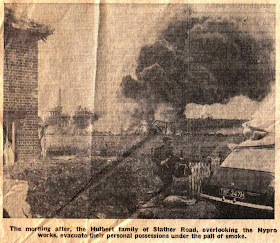 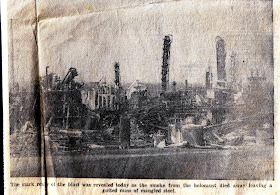 All the above pictures from the Scunthorpe Evening Telegraph

These next two from the Sunday Mirror 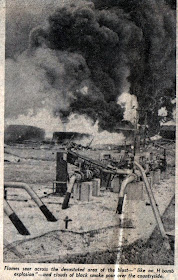 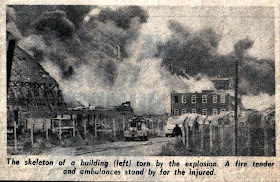 And three from the Daily Mirror 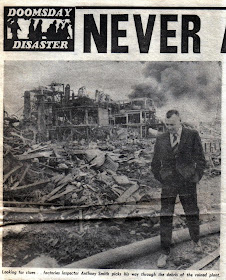 So that's my story for posterity.


My next post, part 2 will be to publish what I think might have been the last issue of the company magazine the 'Nypress', which includes tributes to the 28 men who lost their lives.

Thanks for all your comments. I may not get to reply to them all, but you may be sure they'll be appreciated.